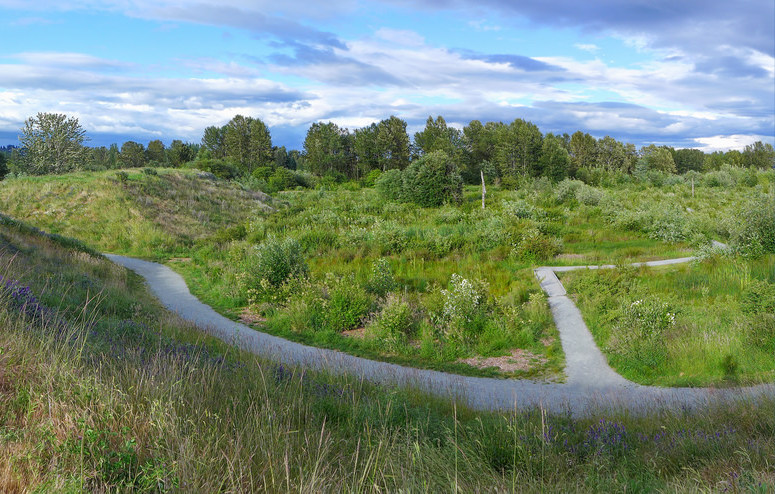 A view of part of the Magnuson Park wetlands in Seattle's Sand Point Neighborhood - Photo posted with permission of Flicker Commons and taken by Ingrid Taylar. Copyright © 2018, Flicker Commons.

For most familiar with the Greater Seattle area, Sand Point is known for its public park spaces, chiefly Magnuson Park. Others might be familiar with its prior use as home to the Seattle Naval Air Station that began just before the start of the First World War. And yet, before even those modern origins, the area itself was inhabited and used by some of the earliest residents in the area. Despite its modest size and humble origins, the neighborhood and peninsula jutting into Lake Washington between 65th and 95th Streets have been steeped in unique history.

Home to the Sand Point Longhouse

Prior to modern development, evidence shows that at least two longhouses were built and utilized by what is now the Duwamish Tribe. Perhaps because of its ideal location along the peninsula and the surrounding grasslands that were home to various game and plants to harvest, the Native residents built the longhouses for use in the winter months, when it was wet and cold.

Because of the wetlands and grasslands and the nearby shore, there was then a rich environmental tradition that included fish, land animals, and lush vegetation throughout. Much of this tradition can still be seen today, evidenced by the installation of Magnuson Park as well as continued preservation efforts. These efforts make it possible to at least have a slight glimpse into what pre-developed Sand Point might have looked like to its earliest inhabitants.

A Flight for the Ages

The land around Sand Point Peninsula itself went largely undeveloped, with the exception of a small airfield (The Sand Point Airfield) in the earliest years of the 20th Century. Save for those flying in and out of the airfield, it was a rather unremarkable and ignored area for most of those living in Seattle and the surrounding cities. That all changed in 1924.

In the early 1900's, a big push was made by several countries looking to dominate the airspace and show the world their aviation prowess. The big goal was to circle the globe by plane, something that had yet to be done. Under the command of Major Frederick L. Martin of the US Army Air Service, four Douglas World Cruisers took off from Sand Point Airfield on April 6, 1924 in an attempt to become the first to successfully circumnavigate the world. Five months later they landed back in the U.S., enjoying a joyous homecoming in DC celebrating their successful endeavors before finally landing back in Sand Point in late September of that same year. With Major Martin's triumph, Sand Point was put on the map, and soon after the US Army redeveloped the existing airfield into what became the Seattle Naval Air Station.

As the Naval Air Base began to play a role in housing and maintaining the Pacific air fleet, more residents of Seattle began to move towards its northern reaches. It was during this time, particularly the years during and immediately preceding the Second World War, where the Greater Seattle area began to expand, incorporating new neighborhoods. Sand Point itself began to feel the effects of this expansion, even if it still mostly served as a Naval town. It's close proximity to the surrounding lake made it the perfect weekend day trip, a tradition that still carries on today.

By the 1960s the Air Station had grown outdated, and other, newer Air Bases in more geographically strategic cities began to make the Seattle Naval Air Base obsolete as well. The airfield and neighborhood with historical aviation origins were no longer needed. The base closed in 1970.

In 1975, the US Navy gave the land back to the city of Seattle, and shortly after the development of what officially became Magnuson Park began. Today the parklands and protected areas have become one of the biggest recreational spaces in the entire state. The aviation history has been maintained through installations and stations throughout the parks. Currently making up the park are sports fields, public swimming beaches, landings for sailing, and hiking trails. In addition, much of the original wetlands have been restored and protected, providing breeding grounds for native species of birds and fish and providing a glimpse into the neighborhood's earliest incarnation as a special place for its Native inhabitants. As restoration efforts continue, residents and visitors to Sand Point will continue to enjoy the natural wonders of the region.

When You're Ready for Sand Point Moving, Call Us!

Use your smart phone or other mobile device to text us for a free quote at 206-659-3874 or Click here for a free estimate today on professional Sand Point moving services.
Get A Free Quote!