Seattle Neighborhoods – The History of Northgate 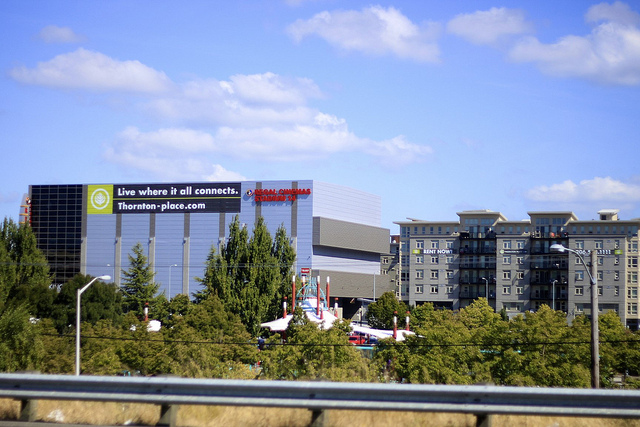 A view of Thornton Place and Northgate Transit Center from I-5 - Photo posted with permission of Flicker Commons and taken by Oran Viriyincy. Copyright © 2018, Flicker Commons.

Northgate then and and now

From boggy marshland, where early members of the Duwamish Tribe once harvested cranberries, to thriving neighborhood nestled against the backdrop of its historic mall, the Northgate neighborhood in Seattle has undergone a dramatic transformation. Once revered by its Native American inhabitants for the spiritual cleansing of its natural springs along the south fork of the Thornton Creek watershed, the neighborhood is now home to a bustling array of commerce, the magnificent architecture of the Sheihk Idriss Mosque, and the future Northgate Station on the Link Light Rail. This commercial tradition and continued development mark the neighborhood nestled East-West between Northgate Way and 130th St. and North South between Roosevelt Way and Aurora Avenue as a neighborhood that continues to grow and thrive.

It is hard to look at the built-up neighborhood and imagine its humble origins as marshland, but its boggy beginnings are indeed what first drew the early Duwamish to the area. The surrounding grasslands were preserved by careful, selective burnings that allowed for a plethora of game to inhabit the open space, providing a steady food source and a rich environment that withstood shifting landscapes for centuries. Much of this original open-space has been maintained near the Thornton Creek, with a strong emphasis continuing to be placed on preservation of the history-laden area.

A history-making transition as the first "mall"

As the shape of American commerce began to shift following the second World War, the completion of the Northgate Center in 1950 was at the forefront of this change. When opened, it was the first regional shopping center to ever be referred to as a "mall." Built by well-known Seattle architect John Graham, Jr., it rested on the former cranberry bogs along Thornton Creek in what is now the Maple Leaf neighborhood in town.

Initially consisting of 18 shops, anchored by the then-named Bon Marche (now Macy's), the design was open-aired with covered pedestrian walkways. By 1952 over 70 tenants made the mall home to their businesses. That same year, sculptor Dudley C. Carter carved the 59-foot cedar totem pole that sat in front of the mall entrance until 2008. In the late 1960's, the covered "sky shield" that kept shoppers dry during rain was replaced with a fully-enclosed roof, ending its open-air period. Overall, the success of America's first true mall helped usher in the nationwide movement towards centralized shopping centers, a commercial blueprint that dominated the latter half of the Twentieth Century, giving Northgate a true claim to fame and its status as early pioneers of the modern commercial boom.

Today and beyond for Northgate – another shift looms

Following the commercial success of Northgate Mall, more businesses looked to the neighborhood as a viable option for their own expansions. As business thrived, more and more residents flocked to nearby apartments and homes, giving the area a sense of increasing bustle and importance within the larger Seattle area.

As the mall's initial luster began to fade, many update projects were completed to keep the center relevant and up-to-date. Included in these projects were the outdoor "urban village" constructed near the western end of the wall along Interstate 5 in 2007. A library, park, and other city buildings were also added around the same time as part of this redevelopment. In early 2018 Simon Property Group announced plans to redevelop the mall to include mixed-use spaces, luxury hotels and housing, and office spaces. These plans for redevelopment coincided with the previous announcement of the Northgate Station on the Link Light Rail, which will open in 2021.

The prime location along the Thornton Creek has made the area a thriving hub for most of its history. From its early days as a spiritual resting place and source of food along its marshes and grasslands for the Native peoples inhabiting the area to its rebirth as a commercial mecca for the Seattle area, Northgate has always drawn inhabitants. With continued redevelopment and the implementation of more mass transit options, the neighborhood is poised to retain its rich history and remain a vital hub for the greater Seattle area well into the 21st Century.

When You're Ready for Northgate Moving, Call Us!

Use your smart phone or other mobile device to text us for a free quote at 206-659-3874 or Click here for a free estimate today on professional Northgate moving services.
Get A Free Quote!