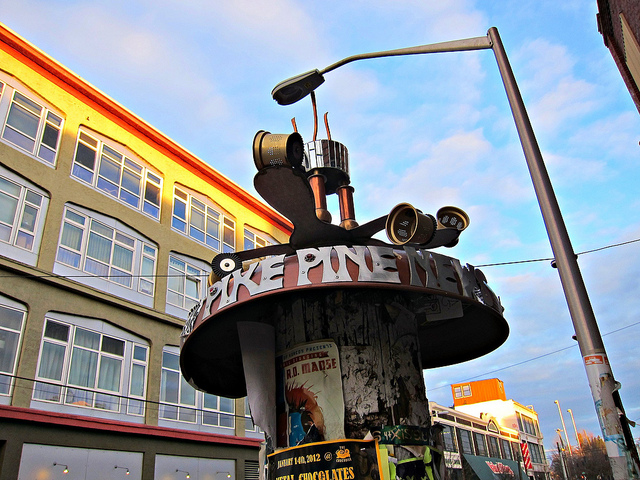 Capitol Hill is a prominent and popular Seattle neighborhood

The Seattle neighborhood of Capitol Hill, bordered to the West by Interstate 5 and to the North by State Route 520, is home to a vibrant population and is one of the more prominent neighborhoods in Seattle. With a rich history, including its role in pioneering the grunge scene of the early 1990s to its counter-culture and gay lifestyle traditions, the neighborhood boasts many thriving scenes today. The Pike-Pine Corridor located in the heart of the neighborhood between Pike and Pine streets is home to a healthy number of popular coffee shops, bars, and restaurants, all of which attract residents from all over the city and tourists looking for certain tastes and entertainment.

It's high elevation and location make for stunning views of the skyline, particularly during the twilight Blue Hour when the outline of Puget Sound provides breathtaking sights for residents. Also notable for its early architecture, the neighborhood is home to some of the wealthiest homes in Seattle, including the famed "Millionaire's Row" along east 14th Street. The neighborhood is as diverse as its storied past.

Initially named Broadway Hill for the main street that ran through the neighborhood, the area was an immediate success, largely due to the development of Volunteer Park, the 48 acre green space that included a reservoir, conservatory, and by the early decades of the 20th Century, the art deco building that housed an art museum. With its vantage point high above the rest of the burgeoning city, it made an ideal location for some of the wealthier settlers in the area to build lavish homes with unparalleled views of the surrounding areas.

James A. Moore, the real estate developer who mapped out most of the area, renamed it Capitol Hill, in hopes of encouraging government officials to move the Washington State capitol from Olympia to his Seattle neighborhood. Although his vision never came to fruition, the city itself saw the immediate benefit of his methodical neighborhood planning. With meticulous, aesthetically pleasing architecture, the neighborhood boomed, and new residents continued to flock to the neighborhood up through World War II.

The forefront of cultural shifts

Following the Second World War, much of the architecture began to fall into a state of disrepair. Coupled with an increase in hastily-made apartments that were designed to fit a maximum number of people in minimal spaces, taking away much of what had previously made Capitol Hill desirable – its uninterrupted, picturesque views and a personal sense of privacy within the neighborhood – it was a neighborhood in transition. During these decades, and especially in the 1960s, new residents moved in on account of these more affordable apartment buildings.

A cultural shift in the neighborhood also accompanied the 1960s. Following the riots at Stonewall in New York, much of the LGBT community in Seattle began migrating to Capitol Hill, establishing it as a pioneering hub for their community. During this time, many of the coffee shops and bars that still exist today were established, and it became a hotbed for certain types of nightlife activity, especially with the younger crowds. As their community began to be accepted, much of the Seattle arts and music scenes began to shift to Capitol Hill as well. During this time, the homes and buildings enjoyed renewal and repair, boosting the overall value and aesthetics of the community.

By the 1990s, Capitol Hill was Seattle's "trendiest" neighborhood among young people in the area. With a plethora of music venues and halls, it also provided opportunities for new music scenes to thrive. It was during this time that Capitol Hill played a large role in the boom and success of the grunge movement, providing spaces for the bands and fans who would help define an entire decade of music, and with it the neighborhood itself. Much of this storied music tradition carries on today.

Today, Capitol Hill hasn't lost much of it's popularity with a segment of locals and visitors to the area. It is still home to many of the hotspot restaurants, coffee shops, and bars in Seattle, many of them still located in the buildings along the Pike-Pine Corridor that were built during the cultural shift of the 1960s. It is still the gay and counter culture center of the city, and it also is home to several of the prominent museums and concert venues in the city. The Seattle Times boasts that it is a capital of sorts, although not in the sense that its founders intended, but instead as the cultural and nightlife capital of the Greater Seattle area. With its pedestrian-friendly sidewalks, emphasis on sustainable living, thriving nightlife, and housing options for a diverse array of backgrounds, it may easily remain the cultural hub of Seattle for decades to come.

When You're Ready for Capitol Hill Moving, Call Us!

Use your smart phone or other mobile device to text us for a free quote at 206-659-3874 or Click here for a free estimate today on professional Capitol Hill moving services.
Get A Free Quote!