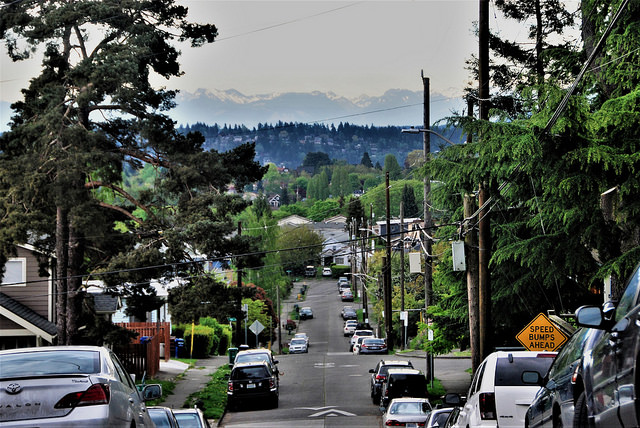 A view of the Cascades from Seattle's Beacon Hill Neighborhood - Photo posted with permission of Flicker Commons and taken by Joe Wolf. Copyright © 2018, Flicker Commons.

Beacon Hill - before it became a hub for tech jobs

From its earliest incarnations as Duwamish tribal lands to its days as tech hub for Boeing and Amazon and home to a ground breaking Food Forest, the Seattle neighborhood of Beacon Hill has always been about innovation. Boasting a historic collection of well-kept, early Craftsman and Seattle Box homes, the neighborhood east of Interstate 5 and South of Interstate 90 in Seattle's South End is one of the more desirous neighborhoods in the Greater Seattle Area. Known for its thriving arts scene, restaurants and shopping, diverse population, and charming homes all set atop the hilly streets that provide stunning views of the downtown skyline and Mount Rainier, it has been named by the American Planning Association as one of the 30 Great Places in America.

The earliest residents of Beacon Hill were the Native American Duwamish tribe. They nicknamed the hill Lushootseed, meaning "greenish-yellow spine," for the color of the deciduous trees that once grew in thick stands atop the hill like colored spines on the back of an animal. It most likely provided the Duwamish with a great vantage point from which to track fowl and game to hunt in the grasslands below. Although not much use for farming, it remained useful land for the Duwamish throughout their history.

In the early parts of the 1850s, John Holgate led a group of Quakers along the Oregon Trail, briefly settling in Oregon before exploring north along the Duwamish River before settling atop the lush hilly region with his brother-in-law, Edward Hanford, and their families. The settlement soon grew and its residents named the hilltop town Holgate and Hanford Hill after its founders. A later prominent settler moved to the area and renamed it Beacon Hill after the Beacon Hill located in his hometown of Boston, Massachusetts. The Beacon Hill settlement enjoyed continued growth and prominence as one of the first and most successful towns in what became modern-day Seattle.

By the 1950's, with the boom of the nearby factory, the neighborhood acquired the nickname "Boeing Hill," as many of the company's workers settled into the neighborhoods around their factory. This coincided with the overall uptick in aviation that fueled growth in many Greater Seattle neighborhoods that marked the region for most of the two decades succeeding the Second World War. At the end of the 1960s many of the original factory workers had moved away from the city and into the nearby suburbs, creating a shift in the neighborhood that would last for more than half a century – one that included, among other things, the renewal of Jefferson Park (the largest designated green space in Seattle) and the development of multiple mass-transit modes for its residents to enjoy.

The second major industry boom to impact the neighborhood would come three decades later when tech giant Amazon started up with headquarters in Beacon Hill. What soon became the sprawling center of Amazon's operations, the company brought a renewed sense of innovation and advancement to the neighborhood, and with it thousands of jobs that attracted a new wave of diverse, tech-savvy residents to Beacon Hill. Although Amazon would eventually relocate its operations, the vibrant community was forever changed by its presence and its residents would continue to innovate in new and exciting ways up to current day.

Today, Beacon Hill is known for its thriving arts scene and world-class restaurants. The Beacon Rocks! performance series draws crowds from all over as part of a larger arts-minded push from the Beacon Hill Arts Organization and ROCKit Community Arts group. Along with the arts, the neighborhood has also taken the lead in sustainable transportation. Beacon BIKES created the Beacon Hill Family Bicycle and Pedestrian Circulation Plan to encourage biking and walking in the community and reduce road traffic. The movement has achieved great success and in 2012 won the Vision 2040 award for its environmental impact.

Perhaps no current aspect of Beacon Hill has achieved more acclaim and nation-wide attention than the Beacon Food Forest. The "forest" itself is located on 7 acres directly adjacent to Jefferson Park, on public land. Founded initially by residents, the forest provides renewable, healthy food for those in the community. Another stated goal of the Food Forest is to bring the diverse community together by sharing the responsibility and efforts of gardening and maintaining the acreage so that it gets most use. The project sparked many similar food forests around the nation and has been repeatedly featured on national news and television shows for its innovation.

When You're Ready for Beacon Hill Moving, Call Us!

Use your smart phone or other mobile device to text us for a free quote at 206-659-3874 or Click here for a free estimate today on professional Beacon Hill moving services.
Get A Free Quote!