Seattle Neighborhoods – The History of Ballard 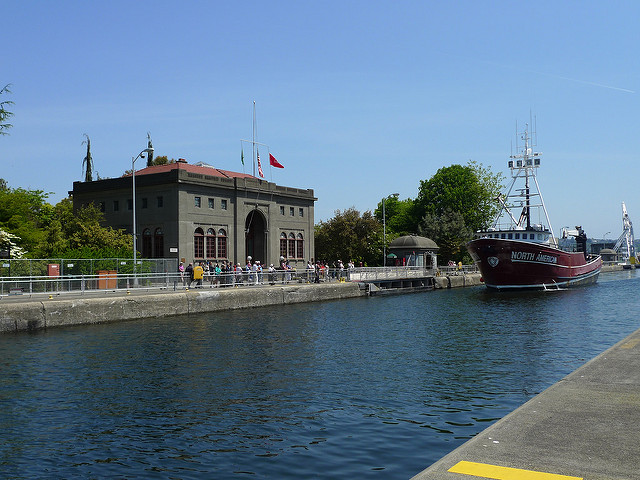 Ballard - Easy access to the Puget Sound and downtown Seattle

In the NW corner of Seattle sits the maritime community of Ballard, slower paced, but with easy access to downtown Seattle. Once only inhabited by native Duwamish - or Lake People - the land was first laid claim in 1852 by Ira Wilcox Utter (1825-1875). The native peoples still thrived on the shores of Salmon Bay to the South and Shilshole Bay to the west when Utter registered his homestead. In 1855, the Point Elliot Treaty was signed at what is now known as Mukilteo in nearby Snohomish County. Various tribes were given reservations of land and certain U.S. government rights while giving away 54,000 acres to the newly arrived European-American settlers. Many Duwamish ignored the treaty and refused to relocate to the newly formed "reservations".

The early days of Ballard

In the area that would later be called Ballard, settlers set to work logging and building up their newly acquired land. Early entrepreneur Judge Thomas Burke recognized the fruitful growth and went ahead to purchase 720 acres north of Salmon Bay. His new land he christened with the name Famdale Homestead. Fully aware of the Great Northern Railroads plans laying track his way enroute to Seattle, he went on to form the West Coast Improvement company alongside Daniel H. Gilman (1845-1913), John Leary (1837-1905) and others. Concurrently Captain William Rankin Ballard (1847-1929) lost a coin toss with his business partner of land given to them as payment for a business debt. Ballard received the supposed "worthless" tree lined area bordering Farmdale Homestead. It would come to pass that this worthless land, with smart networking with Leary, would soon mark his acquired land at a prosperous $1,000 an acre.

From Ballard to an annex with Seattle

Captain Ballard would go on to offer his namesake to the city at its incorporation in 1890. Nine years later the town's city hall was erected and Ballard boasted itself as a careful balance between sin and righteousness - managing to keep churches and saloons in appropriately ratios. Though the area was thriving, as a distinct separate township, its growth proved difficult to keep up with on its own. It found trouble supplying water to all the incoming residents. Historically, it is said a deceased horse was found decomposing within one of the water reservoirs, further depleting an already struggling water system. On November 6th, 1906, the town voted to accept an annex to Seattle with a vote of 996 to 874. The annex was finalized on May 29th, 1907 resulting in the town of Ballard being no more. City Hall was cloaked in black and the American flag hung at half-staff to memorialize its demise.

Today, Ballard still has not been fully absorbed. It maintains its unique appeal over 100 years later. For long time locals, Ballard is Ballard though. Should you be moving here for it's proximity to downtown Seattle, or simply because you perhaps have a love for boating or salt water fishing, the right home in the right neighborhood may possibly make this the last place you ever move to -- because, like many Ballard residents, you may not want to leave after you get here.

When You're Ready for Ballard Moving, Call Us!

Use your smart phone or other mobile device to text us for a free quote at 206-659-3874 or Click here for a free estimate today on professional Ballard moving services.
Get A Free Quote!